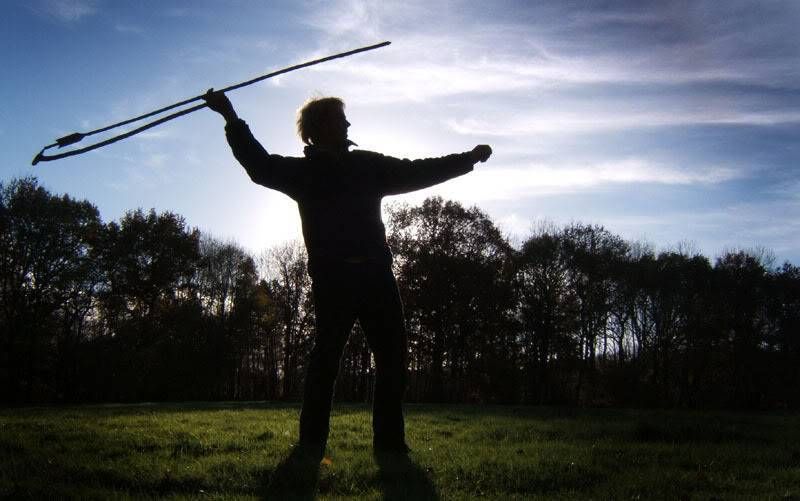 How To Make An Atlatl – A JustSurvival Guide

What Is An Atlatl?

One of the best primitive weapons of all time is the atlatl, whose use dates back to prehistoric times. Before we go into how to make an atlatl, we’ll first cover some basics.

The atlatl is a throwing spear that has a hook on one end and a handle on the other. By essentially lengthening the arm, it provides additional leverage to propel a dart much farther and faster than a one-handed throw.

Quick Suggest: these are the best atlatls we could find on Amazon:

The typical atlatl launches a feathered dart that is longer and heavier than an arrow but weighs less than a spear. The unique throwing motion of the atlatl propels the dart much faster than what could be typically achieved.

In the Stone Age, they were used by humans hunting everything from fish and deer to bear and woolly mammoth.

A well-made atlatl can throw a dart over 100 yards at speeds of over 100 miles per hour, and can be made easily with materials made in nature.

With a little practice, the atlatl is a primitive weapon that everyone should know how to make in a survival situation.

History of the Atlatl Spear-Thrower

The Aztec word atlatl means “spear-thrower”. It is a primitive weapon used in North America over 10,000 years ago, but reports indicate that native Australians have used this ancient weapon as recently as 50 years ago. Evidence from cave paintings show that atlatls were used on every continent except Antarctica.

Before the bow and arrow, the atlatl was the primary hunting weapon. It’s lightweight, simple to make, and powerful enough to penetrate a mammoth’s hide. Instead of carrying around large bulky spears, the world’ first reloadable weapon was created.

Over time, the designs have been tweaked depending on what was being hunted, who was hunting with it, and what materials were available to create them from.

Regardless of the variations, all atlatls have the same three components: the hook, the shaft, and the grip. If you can picture the Chuckit! tennis ball launcher for dogs, it works in the same way. It allows you to throw twice as hard with half the effort.

How To Make An Atlatl

A simple atlatl can be made using a tree branch.

To make this simple tool, you will need:

Locate a branch approximately 2.5 inches in diameter. Poplar is a great choice because it is lightweight and dry; not sticky like pine. Chop the branch down from the base of the tree. Choose a branch that has a smaller branch protruding at a 40-45 degree angle from end, and chop off a 24-inch length. Length is more of a personal preference, but most people prefer to use one at least the length of their arm.

The small branch, or “peg”, will become the section that holds the dart in place when you throw. The goal is to find a branch that strikes the perfect balance of comfortableness and weight. Too light of a branch will be unstable when you release, and too heavy will be hard to aim.

Use your knife to sharpen the small side branch to a point.

This is optional, but you can add a wrist loop from your paracord to keep the atlatl from coming out of your hand during release. How to Make an Atlatl Dart

The dart is the projectile that the atlatl propels. Think of it as a large arrow, with a large point on the front and fletching (also optional) on the back.

Darts can be made out any sticks or branches, but I’ve found the best survival darts are made out of river cane. Bamboo also works well.

Next, you’ll need to make the foreshaft. The foreshaft is a smaller, secondary shaft that you insert into the tip of the mainshaft. This will provide additional strength when it hits the target. Push the foreshaft into the river cane until it hits a joint, and leave about a foot of foreshaft sticking out of the cane. Tie it into place with any plant fibers you can find.

Use your knife to sharpen the foreshaft into a point. Your dart is now useable, although with a few simple modifications, you can greatly increase the usability of the dart. Much like making a fire without smoke, small modifications to your dart can make all the difference.

Tips: You don’t necessarily have to fashion the foreshaft into a point. Use whatever you have at your disposal – a tent spike, an arrowhead, or a piece of glass.

Fishing: If you attach several points to the end, the atlatl dart makes an excellent fishing spear. Instead of trying to pin a fish with a single pointed end, you have several. This provides a larger surface area, increasing the chances of a successful throw.

Strength: If an atlatl dart is going to break, it is either going to break at the tip, or at the mainshaft joint (where the the foreshaft was inserted). To increase the strength of the joint, wrap sinew or other plant fibers tightly around the joint.

Accuracy: To increase the accuracy of the dart, you can add feathers the end. On an arrow, this is the called the fletching. It works the same way for the atlatl dart.

How to Hold and Throw the Atlatl

Because the river cane is hollow, the end without the pointed tip is the end that will be placed into the atlatl peg. Wrap your palm, middle, ring, and pinky finger around the atlatl, and place your index finger and thumb on the sides of the dart. Hold it tightly and securely against the notched peg.

Here’s the best “how to throw an atlatl” video I’ve found:

Choose a practice area that can double as a backstop. While atlatls can travel up to 100 yards away, 15 yards is a pretty good distance to begin with.

Always test using the same test darts. Once you become more comfortable throwing it, you can adjust a few variables – distance, different targets, variations of the atlatl, etc.

Measure how deep the arrow penetrates with a one-armed throw, and then measure again with the atlatl. You’ll be amazed at how much deeper it penetrates with half the amount of effort required.

Here’s a video showing the comparison:

Making an atlatl is a survival skill everyone should learn. However, some people are interested in competing in atlatl throwing competitions, practicing in their backyard. If you decide to go this route, Thunderbird Atlatl crafts some of the highest-quality atlatls in the world, and I recommend you check out their selection.

Good luck! If you get stuck, I recommend you watch some of the videos I’ve posted above. It’ll show you everything you need to know.

Survival expert with 10+ years of experience. Combining my passion of writing with my love of the wilderness, I am able to offer in-depth articles and how-to guides to help you survive in any survival situation.